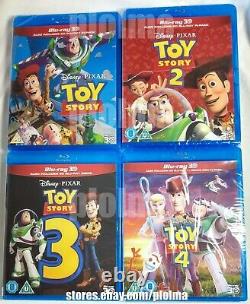 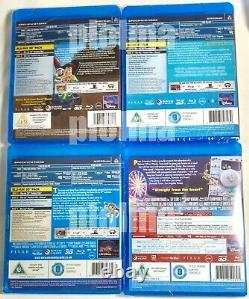 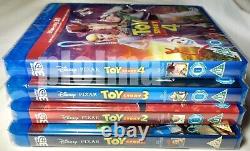 These are official United Kingdom releases. The discs are all Region-Free (ABC) , meaning these discs play on Blu-Ray players around the world. Items come from a smoke-free and pet-free home.

Thank you for looking at my listing! The audio and subtitle offerings differ across all four movies.

The MPAA only rates movies for the USA, you won't find ratings like PG-13 or R on the box. The foreign language audio and subtitle options, as well as bonus features, may differ from an American release. The jewel cases are a few millimeters thicker than the slim American Blu-Ray cases, and please note that if the item includes any sort of redeemable code, whether it's a digital download, rewards, or bonus code, it will only be redeemable by UK residents for UK programs.

Again, IF a digital copy is bundled inside, that digital copy can ONLY be redeemed INSIDE THE UNITED KINGDOM. Users outside the United Kingdom will NOT be able to redeem any Digital UltraViolet codes included inside.

Once you actually start playing the main feature, you will notice no difference from an American release. Q: Will this Blu-Ray play in a normal DVD player? A: No, you must have a Blu-Ray player to play this title. Q: Since this is a UK import, is the English audio "British" or is it "American"? A: The audio is exactly the same as it is for the American release, so don't worry there are no British voice actors dubbing over American speakers!